On Wednesday, the City of Cape Town opened the newly expanded Muslim burial section at the Maitland Cemetery.

Saudi Arabia’s Islamic affairs minister says the order was in response to citizens’ complaints about the loud volume of mosque speakers. Saudi Arabia has clipped the powers of its religious police who once elicited widespread fear [File: Faisal al-Nasser/Reuters]

MAN LEFT FIGHTING FOR HIS LIFE FOLLOWING MOSQUE SHOOTING - RESERVOIR HILLS 2021/06/01 At approximately 10am Emer-G-Med Paramedics responded to the scene of a shooting incident at a Mosque in Spencer Road, Reservoir Hills, west of Durban. On arrival on scene a fifty-seven year old male was found to be seated in his motor vehicle having sustained multiple gunshot wounds from a high caliber weapon. Advanced Life support intervention was needed to stabilize him before he was placed onto t specialized stretcher used for the treatment and prevention of potential spinal cord injuries, and taken through to a nearby hospital for the further immediate definitive care that he required. The motive for the shooting and the facts surrounding it are unknown and will form the subject of a South African Police Services investigation. Emer-G-Med 0861 007 911 #whensecondscount 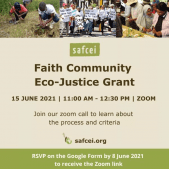 Are you planning an environmental activity in your faith community? Join SAFCEI’s webinar on the 15 June to find out how to apply for a Faith Community Eco-Justice Grant for environmental activities. The Zoom call on the 15 June 2021 at 11 am will explain the grant making process and criteria your faith institute or community will need to be eligible. SAFCEI is offering small grants to faith institutions and communities wanting to carry out ethical environmental action in Southern Africa. (Criteria are different if you are in South Africa or elsewhere.) SAFCEI will support local environmental activities in your faith community, whether it's practical action, such as a faith institution vegetable garden; or training, such as faith community eco-footprinting; or campaigning, such as an environmental campaign about plastic waste. So if you have plans for an eco-justice activity with your faith community and would like support from SAFCEI, please join the webinar. If you are not able to attend this webinar but are interested please contact our office. Submit your RSVPs and data requests by 8 June: https://forms.gle/xY7A6jA3nNbHg4JY7 More information about the grant can be found here: https://safcei.org/small-grants-for-eco-justice-work.../ Yours sincerely, The SAFCEI Team