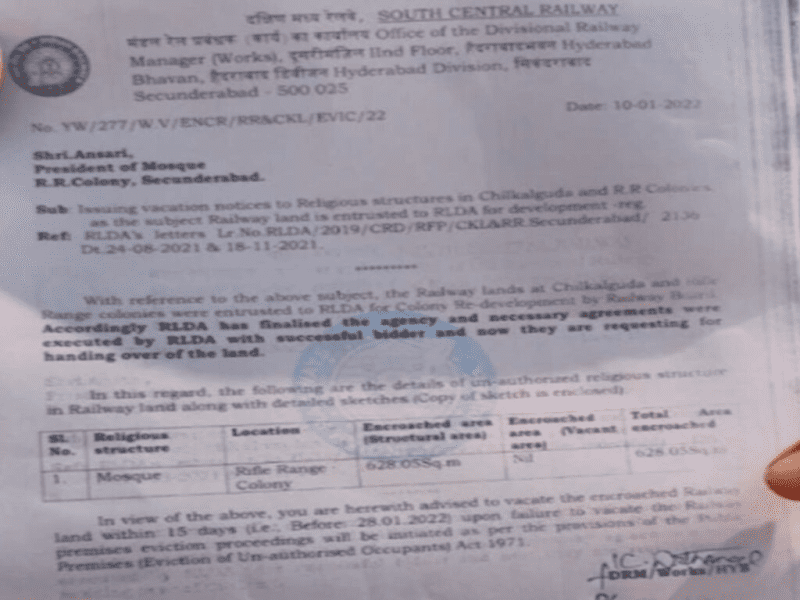 Hyderabad: A notice issued by the South Central Railway to vacate a mosque in Chilkalguda area of Secunderabad has sparked controversy. Opposing the notice, scores of worshippers on Friday gathered to offer prayers and support to the mosque.

On January 10, the south central railways issued a notice to Mohammed Yousuf Ansari, the President of Syedna Ghouse-ul- Azam Mosque located at Chilkalguda, in connection with vacating the mosque in wake of the developmental plan.

Since the RLDA wants to make use of the land, the management of the Masjid committee has been given 15 day time to vacate the premises i.e till January 28 and upon failure to do the same eviction proceedings will be initiated.

Aggrieved with SCR’s notice, the president of the Mosque had earlier approached Telangana High court.

The petitioner pleaded the court to pass directions not to dismantle the structure as doing so would be illegal, unjust, arbitrary and in violation of Article 25 of Constitution of India as well as a violation of the Waqf Act 1995.

Justice Shameem Akhtar, the judge overhearing the case, granted an interim stay in the matter. The case is still ongoing as protests continue side by side.