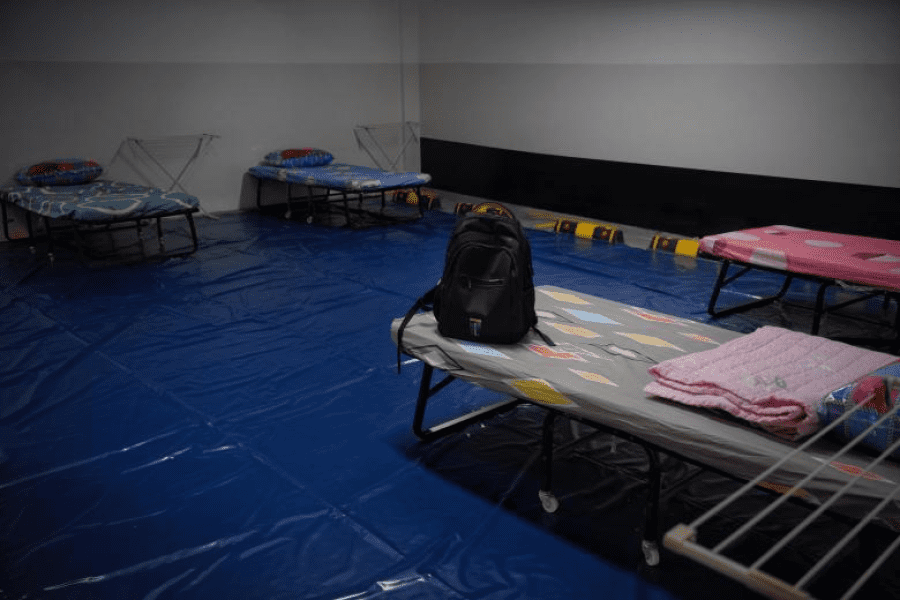 SINGAPORE - An elderly man spent four months living out of a staircase landing in Bukit Gombak before he was referred to the Safe Sound Sleeping Places programme at Assyakirin Mosque for rough sleepers and the homeless.

A nurse of over 50 years, Mr Rahman (not his real name), 76, is now unemployed but takes up gigs such as being a safe distancing ambassador from time to time for extra cash.

He occupies one of the five beds in the mosque's basement. Other than the beds, there are basic items like toiletries, a microwave oven and instant noodles.

Assyakirin Mosque, in Yung An Road, Jurong, is part of a group of four mosques working closely with the Partners Engaging and Empowering Rough Sleepers (Peers) network and the Ministry of Social and Family Development (MSF) to provide temporary shelter for rough sleepers and the homeless.

The mosque started its programme during the Covid-19 circuit breaker in 2020.

President Halimah Yacob visited the mosque on Wednesday (Jan 19) to learn more about its initiatives and speak to some of the people who have been living there, like Mr Rahman.

Speaking to the media after the community engagement, Madam Halimah said these programmes are rolled out in response to national challenges and issues.

"One key national challenge, of course with the pandemic, is that you see people sleeping rough in various places in Singapore," she said.

On Monday, The Straits Times reported that seven organisations were operating Safe Sound Sleeping Programmes before Covid-19 hit, and the number rose to more than 40 during the circuit breaker, including religious organisations such as mosques and churches.

Madam Halimah said that Assyakirin Mosque's community pantry, which provides free groceries for those in need, also caters to a growing need.

"People may be in between jobs, or during the pandemic they may have taken pay cuts, and there are shortages of certain things that you need to cook at home or to eat," she said.

The pantry opens twice a week on Mondays and Thursdays, from 10am to noon and 2pm to 4pm. It has served 3,000 beneficiaries and distributed over $20,000 worth of food and groceries since its inception in 2019.

More On This Topic

Sleeping rough: Some choose to do so, others have fallen on hard times

The mosque accepts donations from partners like The Food Bank Singapore, as well as from the public who can leave their donations at its entrance.

Ustaz Muhd Aizat Zulkifli, the head of social and community care at Assyakirin Mosque, hopes the work they do for the community can be adopted by other organisations across the island.

"The mosque sees itself as a helping hand or a supporting role in the community, and we want to be an example and encourage other mosques and organisations to do the same and start similar initiatives to help the needy," he said.