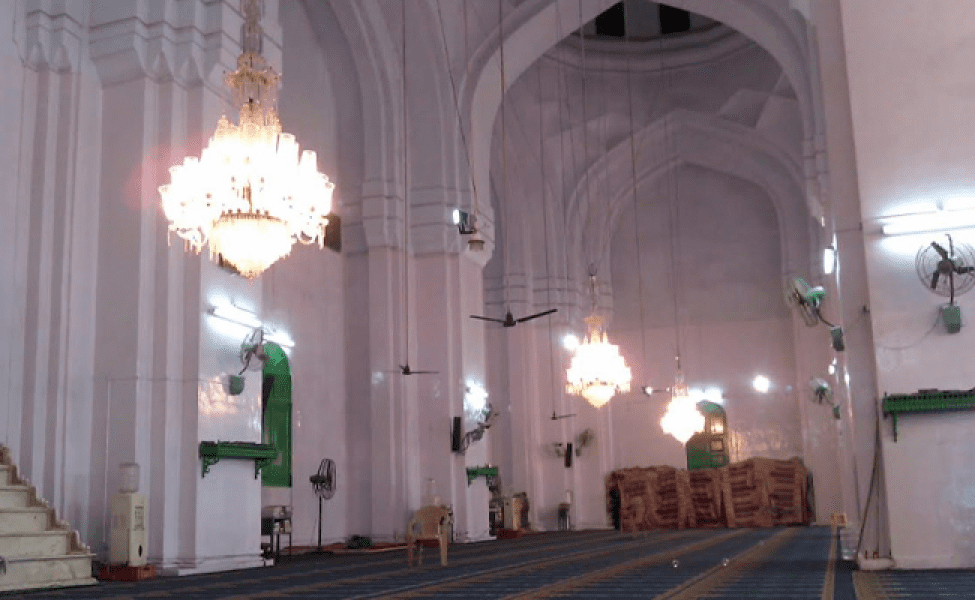 In addition to adding light and beauty to festive celebrations, the chandeliers of the Mecca Masjid are truly representative of the history and culture of historic Hyderabad and its heritage.

The pride of place amongst all the chandeliers goes to the centrepiece, a large Belgian chandelier holding more than 100 lights. This was gifted to the Masjid by one more luminary and an important person in Hyderabadi history – Sir Viqar-ul-Umra, Prime Minister to the Nizam from 1893 to 1901. One of his many titles, Iqbal ud Dowla, can still be seen today in his ancestral home and family mosque near the Charminar. He gifted a massive chandelier – it was so big that it required five chains to hold it in place when it was first set up. This gift is mentioned in the second volume of Bustan-E-Asafiya by Manik Rao Vithal Rao.

Talking about the chandeliers to TNM, the Superintendent of Mecca Masjid, Abdul Qadeer Siddiqui, says, “The mosque has 15 chandeliers which are switched on during the sacred and sanctified nights of Shab e Miraj, Shab e Barat and Shab e Qadr. Recently, apart from illuminating them on these three sacred nights, we have started opening them and illuminating them during the entire month of Milad un Nabi and Ramadan as well.” During non-festival times, the chandeliers are kept wrapped up in cloth to keep them safe.

Muezzin of the mosque, Hafez Shaikh Mohammed Ali, says, “These chandeliers have also become a part of the mosque’s heritage. Apart from people who come for prayers, a large number of visitors, including people from across the state, visit the mosque to catch sight of the chandeliers during sacred nights.”

Convenor of INTACH, Anuradha Reddy, says, “Hyderabad has a history of chandeliers, most of them were set up during the Asaf Jahi era when there was no electricity. At that time, candles were used to illuminate them.”

“All the Deodis, Havelis, Kothis, Mahals, Mansions and palaces of the nobles and elites including the Nawabs have a good collection of chandeliers. Initially Irish, British and French made chandeliers were introduced in Hyderabad. Later chandelier making units were set up in Bombay and Calcutta,” she adds.

Historian Mohammad Safi Ullah, while highlighting their beauty, says, “These types of chandeliers can also be seen in Chowmahalla Palace. After the introduction of electricity in Hyderabad State in 1910, the candles in the chandeliers in Mecca Masjid were replaced with electric bulbs.”

Mohammad Khaleel, an electrician who is in charge of maintaining the chandeliers of the mosque, says they are of different types. “All chandeliers are of different kinds of models and are in pairs. However, one Belgium-made chandelier is the most beautiful of them. Its weight is about 200 kg. The repair works of these chandeliers were last done about 20 years ago by experts from Rajasthan.”

Talking about the cleaning process, he says, “The chandeliers are suspended about 10 feet from the ground and cannot be lowered. My assistant and I have to get up on a high pedestal to clean them. The old chandeliers are very different from the ones currently available in the market. We have to clean them, especially the glass parts, very carefully with a wet cloth.”

He further says that while the chandeliers seen in the first row of the mosque have a capacity of 25 bulbs each, the Belgium-made chandelier in the centre holds about 100 bulbs. Other chandeliers vary in capacity ranging from 20 to 30 bulbs.

With the change in technology, the bulbs too have been updated. “Earlier, 15-watt bulbs were used but for the last five to six years, we have been using LED bulbs to reduce our electricity consumption,” he adds.

Talking about the herculean task of wrapping and unwrapping them and setting them up, he says, “It’s a difficult process. The chandeliers are wrapped in a huge cloth. The process of unwrapping and cleaning goes on for two to three days. The cleaning process of the largest two chandeliers alone goes on for one whole day and they are wrapped up again, one day after the occasion.”

The historic chandeliers are nonetheless victim to the forces of nature. “Strong winds were witnessed in the mosque earlier, which led to fears of collision of the chandeliers with each other. That’s the reason the chandeliers were suspended with pipes instead of chains like earlier. Some of the chandeliers have been broken and damaged. We have kept the pieces that have fallen, and are awaiting funds to have them repaired,” the Superintendent of Mecca Masjid says.

Wajeed Ullah Khan is a Hyderabad-based freelance journalist who writes predominantly on issues surrounding Old City. He can be contacted at wuk040@gmail.com.