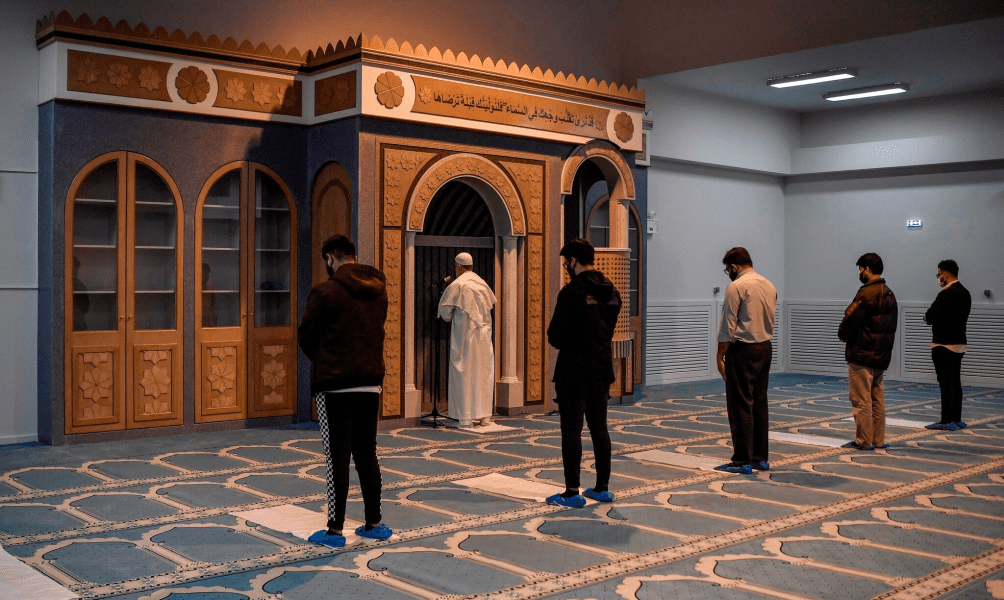 ATHENS — The mosque that took more than a century to open, surviving legal, political and financial challenges, has closed in less than a week, a temporary victim of the coronavirus pandemic.

Athens, the Greek capital, had not had a dedicated, purpose-built Muslim place of worship since the expulsion of Ottoman forces in 1833, a gap that officials have long sought to fill. The first act of Parliament aimed at opening a mosque came in 1890, an effort that intensified in recent decades as the Muslim community has grown, now praying in dozens of unpermitted, makeshift venues like basements, garages and parking lots.

In the face of objections from the powerful Orthodox Church, and from nationalists who associate Islam with foreign occupation, plans repeatedly came to nothing over the years, leaving Athens as virtually the only European Union capital without a purpose-built place of worship for Muslims.

But in 2006 Parliament approved construction of a fully state-funded, state-run mosque in Athens — the only such arrangement in the European Union, Greek officials say. The opening, initially scheduled for 2010, finally arrived early this month after the project surmounted a mountain of red tape and legal challenges.

With coronavirus spiking, though, restrictions immediately limited a building designed for around 350 worshipers to only 13 at a time. Then, the day after the mosque’s first Friday Prayer, Greece returned to a national lockdown, forcing it to shut completely for now.

The closing heightened the bittersweet feelings many Muslims already had about the state-funded mosque — a squat off-white building, conspicuously free of minarets, set on a sprawling former naval base in an industrial district near downtown Athens. Its 4.2-acre grounds include a park with a fountain and a playground.

“My feelings are split in two,” Mohammed Zaki, the mosque’s 55-year-old imam, said in the courtyard before an early-afternoon call to prayer on the day the new lockdown was announced. “On the one hand I feel incredible relief and happiness — finally we have a mosque we can pray in.”

But his joy, he said, was tempered both by the Covid-related restrictions and the fact that dozens of makeshift mosques in the capital were now likely to close.

“It’s a huge problem,” Mr. Zaki said. “We are not 10 or 20 people,” he said, referring to the roughly 200,000 Muslims from countries including Pakistan, Syria, Bangladesh and Afghanistan who live in Athens. “Where will all these people go?”

“I hurt for those who come to pray and are turned away,” he added.

Around 70 venues operate as unofficial prayer sites, many without fire-safety certificates. Though 10 of those venues have secured permits to continue operating, the remainder must either obtain permits or close, the government says.

Among those now permitted is the Greek-Arab Educational and Cultural Center, which opened in 2007 in a former textiles factory in a southern suburb with funding from a Saudi businessman.

The Greek government considers the new Athens mosque to be a pioneering project.

“It’s a very sensitive experiment as we’re trying to make sure that all Muslims have a say in the running of the mosque without any countries getting involved,” said George Kalantzis, the general secretary of the Education and Religious Affairs Ministry.

The aim was to have the mosque under state control, Mr. Kalantzis said, adding that a site overseen by the state was less likely to become a breeding ground for radicalism.

Some Muslims say the new mosque signals a welcome shift in Greek attitudes.

Muhammad Shabir Dhama, a 60-year-old restaurant owner from Pakistan, was positively beaming when interviewed on the mosque’s grounds on the day the lockdown was announced.

“I have no words,” he said, wearing prayer robes, a face mask and protective shoe coverings. “I’d like to say a big thank you to the Greek government and to everyone who helped make this happen.”

When It Comes to Living With Uncertainty, Michael J. Fox Is a Pro

Before ‘I Have a Dream,’ Martin Luther King Almost Died. This Man Saved Him.

“Things have changed,” added Ehab El Sayed, who sits on the mosque’s managing board. “Greeks didn’t know what Islam was. They used to equate it with extremism and fanaticism. They’ve realized that Islam is another strong, large religion, like Judaism and Christianity.”

Not all Athens Muslims are satisfied, however.

The head of the Muslim Association of Greece, Naim Elghandour, said the mosque’s small size and architecture are an affront. “It looks like a warehouse or an oversized kiosk,” he said. He also took issue with lettering on the building saying “Education and Religious Affairs Ministry.”

“They’re saying, ‘Muslim, you’re not equal,’ showing them it’s controlled by the state,” he said.

Mr. Elghandour had run a large unofficial mosque in the nearby port of Piraeus for decades, which was among those that closed recently. He said shutting such venues could mean potential radicalism went unchecked. “It dangerous to close down mosques that are monitored by police as people will gather to pray in other areas.”

Dunja Mijatovic, the commissioner for human rights at the Council of Europe, a body that seeks to safeguard rights across the continent, welcomed the mosque’s opening.

“Moves like this are not only important signs of the respect of religious minorities, but also significant contributions to more inclusive societies,” Ms. Mijatovic said. “Building bridges is much needed today as extremism and attacks against freedom of thought, conscience and religion are unfortunately on the rise in Europe.”

Opposition to the mosque, much of it from far-right groups and residents, has eased. The extreme-right Golden Dawn party had led protests in recent years but its own popularity has waned after the conviction of party leaders last month in a landmark criminal trial.

Still, local residents have raised repeated complaints. Ekaterini Pantelidou, an Athens-based lawyer who represents one group of residents, said they aimed to go to the European Court of Justice, saying that ancient ruins are under the site and that a church was torn down to accommodate the mosque. Officials dismiss such claims.

“It is a site that was always Orthodox Christian, since ancient times,” Ms. Pantelidou said. “Can we build a Parthenon in Mecca?”

For many Muslims, the mosque is but a first step.

“It is a good start. But there are other things we need to do,” said Mr. El Sayed, of the mosque’s managing board, citing discussions about a Muslim cemetery. Athens-based Muslims must currently transport their dead to a cemetery in Thrace, northern Greece, where the country’s Muslim minority is concentrated.

Another goal is the addition of a minaret to the building. At a time of increased tension with Greece’s Muslim neighbor Turkey, though, some political observers have said such a move could set off debate.

The issue is on the agenda, Mr. El Sayed said. “After the pandemic, we’ll ask for a minaret.”