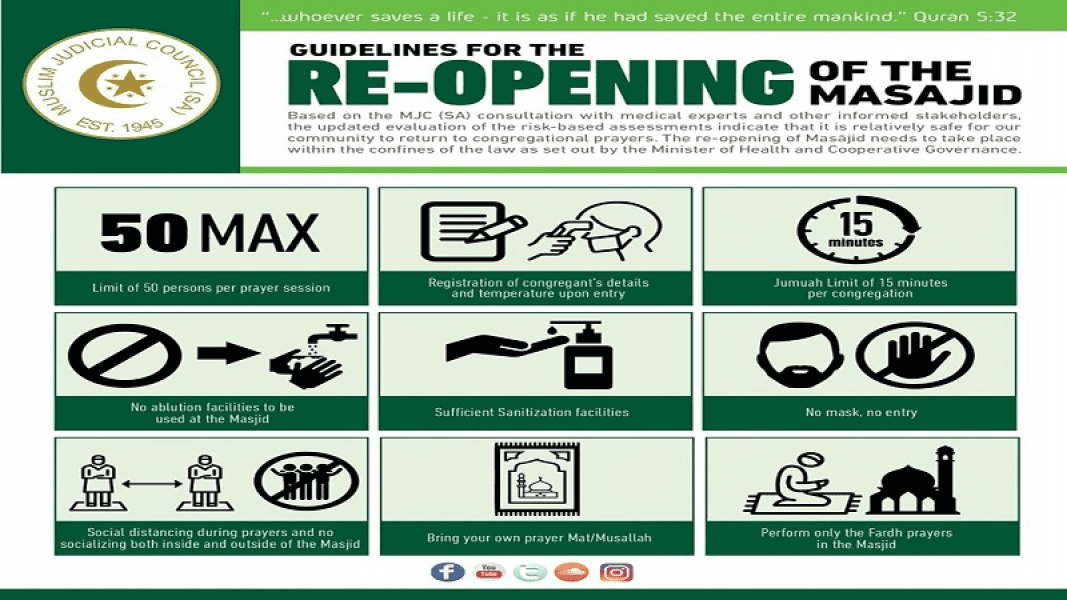 The Muslim Judicial Council (MJC) has released guidelines for the reopening of masajid, as South Africa eased into Alert Level 2 at midnight on Monday. It follows at least five months of many masajid being closed, with a limited number reopening under Alert Level 3 which was instituted to help save the ailing economy.

On the heels of further decline, accompanied by a drop in Covid-19 infections, the MJC announced blanket provisions and urged masjid committees to practice strict implementation of the regulations.

Speaking to VOC this week, Second Deputy President Shayk Riyaad Fataar said that the council’s choices was supported by scientific information that the infection rate has declined, and recovery rate has increased. The ulema body consulted with government health officials, medical practitioners, hospitals, and other stakeholders during a meeting on Friday.

Fataar also pointed to Western Cape Premier Alan Winde’s announcement that some of Cape Town’s field hospitals have shut down, due to a slow intake of patients and reduction in hospitalizations and fatalities in the province.

“All (regulations) were based on the assessments that indicated that it is safe for our community to return to salaatul jama’a (prayer in congregation). We know that the community has been longing for that, many people have said ‘I miss the masjid’.”

“Obviously, it doesn’t mean it’s a free for all. The messages circulating in the musli community (says) it is still a time to be cautious. When the masajid open, it doesn’t mean that its back to the normal state,” he added.

“The MJC is encouraging to stay in confines of the law, we know about the health and safety protocols. We record so that we are always aware, in the event that something does happen so we can go back,” said Fataar.

He however encouraged the elderly and those with comorbidities to continue to stay at home.

“This is all about self-protection- (we) must look at my state and condition. If (i) am sick, stay at home and don’t infect somebody else,” he said.

“Our community has implemented measures to keep our community safe. the whole idea at the beginning was to flatten the curve and alghamdullilah we seem as if we’ve come there. Everything was based on the preservation of life, protecting the masajid and our deen.”

“On 16th of August only one death was recorded (at Muslim StatsSA), everyone was so relieved. We haven’t seen such numbers since early June,” he noted.

Fataar speculated that many masajid will use this coming Jumuah (21 August 2020) as an ‘opening day’, emphasising the need for masajid to be cautious.

“This is not a rush to open, it’s a rush to make sure everything is in place.”

The guidelines are as follows: