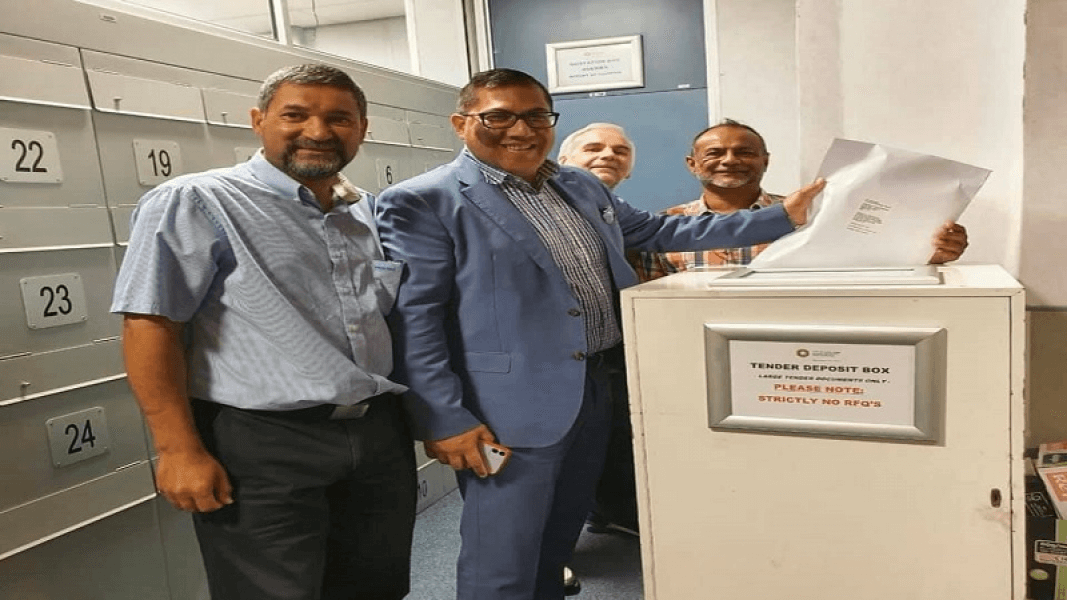 Friday marked a historic moment for the Muslim community as the Durbanville Islamic Society (DIS) submitted a tender to the City of Cape Town for a piece of land on which to build a masjid. With the increasing number of Muslims living and working in Durbanville and its surrounds, there is an urgent need for facilities for daily prayers and Jumuah. The City of Cape Town has earmarked a piece of land zoned for religious worship.

The pursuit for land follows years of perseverance and weekly Jumuahs in the local city hall, which at most times, could not accommodate the throngs of musallees. The DIS is currently using a residential property (28 Tambotie Street) to run its community-based operations. This facility is however insufficient to meet the community’s growing needs.

DIS trustee Essack Mohammed said when they applied for the tender, the city made them aware of the fact that there were four other religious groups that applied for a tender for that piece of land. On the 30 January, the tender was submitted at the civic centre. It was realized that there were only two tenders, the first being the New Apostolic church which is right next door to the vacant property and the second being Durbanville Islamic Society. The City said they would entertain no less than R1.2 million so the Durbanville Islamic Society added a bit of insurance making it R1.5 million as they have no where else to build this masjid.

The prayer facilities will be all-inclusive, catering to males and females. Persons with disabilities will have access to all areas with well-placed ramps and a lift. Also, persons with children can leave their children at the care facility (ECD) for children and infants while they conduct their prayers. Elderly can use the lift to access the upper floors and there will be comfortable seating built in for their use and for prayers.

A multi-purpose hall will be part of the facility. This will be transitioned into additional space for Friday congregational prayers. It will also be leased to the public for events such as weddings and conferences.

Mohammed envisions that the masjid will also be used for education and social care services. The facility will house an Early Childhood Development (ECD)/ Creche for the general public. This will function as a regular ECD taking care of and nurturing and developing children throughout the day.

This masjid will also be open to the general public to be used for research, study, homework assignments and reading by learners and academics.

The facility would be equipped with internet and computer workstations as well as books and research material. It will have online access to qualified City and University inter-loan library facilities. The library will be supported by a qualified librarian.

The DIS team visualises an eco-friendly that has “a simplistic yet contemporary design”. The building is orientated towards Qibla in Makkah (the universal direction which Muslims face when praying). This allows the building to be orientated towards North, taking full advantage of the natural lighting.

The building will have a simplistic minaret (tower) at the main entrance for legibility and character. The main prayer area and minaret will be visible from the street giving the building its significance and character, with the parking area hidden towards the rear of the site.

Much emphasis will be placed on the landscape and vegetation on the site. A planted garden will be seen from the street and application will be made to landscape and plant the verge of the street, to complement the “green and vegetative” aesthetic of the Durbanville area.

Mohammed said they received tremendous support from Pinelands masjid, the Muslim Judicial Council (MJC) and a number of architects and engineers willing to impart their knowledge.

Mohammed said that the timeline for the tender date results to be released would be three months from the date of submission. He is confident that the tender will be a success.

“If the tender does not become ours then Allah has better plans for us,” said Mohammed.

The completion of the masjid would be done by 2023, if the funds are available to build the masjid. The architects, engineers and construction workers are anxious to start the foundation of the masjid building and are ready for the next step.

Mohammed has appealed to the public to show support in aid of the masjid funding project by donating or sponsoring money into the two accounts of the Durbanville Islamic Society. The funding will help with assisting the masjid building.

Reference for both accounts are: Durbanville Islamic Society (DIS) or Durbanville masjid project.